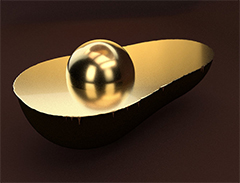 This year we agree with at least 8 other prices around the world, including Origins 2017 Best Board Game.

So, the Ludi et Veritas’ Choice Award, AKA Golden Avocado, for the 2016 Best Game goes to:

Scythe (2016). This is not a game that we see often played in our Friday night sessions but there is no doubt that left a good impression on us. For those who are not familiar with the game, Scythe is an engine-building game set in an alternate-history 1920s period.  In Scythe, each player controls the fate of one of five factions of Eastern Europe who are attempting to earn their fortune and claim dominance. Players conquer territory, enlist new recruits, reap resources, gain villagers, build structures, and activate monstrous mechs. However, don’t get deceived by this apparently warlike description. This game is not a wargame. Combat may happen but it is only a small fraction of this complex game. Each player begins the game with different resources (power, coins, combat acumen, and popularity), a different starting location, and a hidden goal. Every part of Scythe has an aspect of engine-building to it. Players can upgrade actions to become more efficient, build structures that improve their position on the map, enlist new recruits to enhance character abilities, activate mechs to deter opponents from invading, and expand their borders to reap greater types and quantities of resources. These engine-building aspects create a sense of momentum and progress throughout the game.

We could not finish this article without mentioning Codenames and Codenames Pictures. Their combined votes got them to be a close second. It has been a best seller every where and new versions are coming out, including “Codenames Disney Family Edition”, “Codenames Marvel Edition”, and “Codenomes Duet”.
Be sure that we will play some of them in our events.